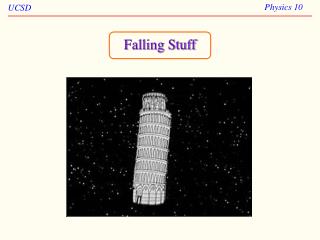 Falling Stuff. Do Falling Objects Accelerate?. It sure seems like it! Starts from rest, goes faster and faster.... What about a feather, though? Air resistance, drag Terminal velocity What if we could get rid of the air? What’s responsible for the downwards force?

Power Searching 501 (?): a crash course - . the stuff you need to know about searching, but may have forgotten along the

VERTIGO - . illusion of motion interpreted as self movement or environmental movement rotating with spinning sense of

VI. Competing technologies - . a naïve question. what if the old technology can be used along with the new one? would

Industrial Revolution - . by j. collins. industrial revolution. the ir is when people stopped making stuff at home and

Chapter 17 Star Stuff - . 17.1 lives in the balance. our goals for learning how does a star’s mass affect nuclear

Industrial Revolution - . by j. collins. industrial revolution. the ir is when people stopped making stuff at home and