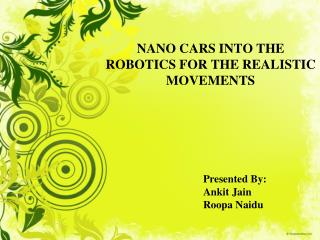 NANO CARS INTO THE ROBOTICS FOR THE REALISTIC MOVEMENTS NANO CARS INTO THE ROBOTICS FOR THE REALISTIC MOVEMENTS

The Exciting World Of RC Cars! - Rc cars are amazing choice for a hobby. rc cars are fast and powerful, so you can get

Pollution/Cars - . pollution and cars ... find out more by carrying on to watch. all about cars. cars can be dangerous.

ROBOTICS - . robotics. robotics is the branch of technology that deals with the design, construction, operation,