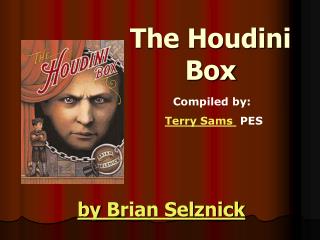 Houdini - . houdini. introduction. about us the research problem the proposed solution one language for the web

The Tale of the three Brothers - . from harry potter and the deathly hallows. technical info. directed by ben hibon in

Text, author, and reading goal - . today you will continue reading the houdini box by brian selznick. as you read you

Wrap Up Session Review Notes Use body breaks to keep kids engaged - All answers accepted, students not afraid to share

Bonding - Compare and Contrast - . most are crystalline solids held together by electrostatic force (attraction between +

Brian Selznick Author and IIlustrator - . brian selznick started out as a bookseller and window dresser at eeyore’s

Compare and Contrast; Monitor/Clarify Lesson We Were There, Too ! - . unit 3, lesson 15 day # 1. objectives for today.

Harry Houdini - . b y michael . harry houdini was born on march 24 1874 in budapest hungary. he was named ehrich by his