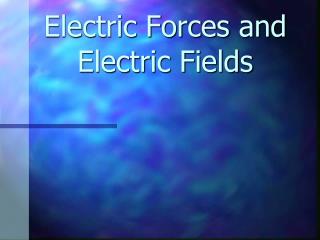 Electric Forces and Electric Fields. The primary particle that carries charge (and therefore can be lost or gained) in an atom is a/an:. Proton Neutron Electron. When a positively charged object comes close to an negatively charged object, the negative object will:. Be attracted Be repelled Electric Fields and Forces - . gravity is a field force. a small object in the gravitational field feels the

Electric Fields and Forces - . the magnitude of an electric field can be determined by measuring the force experienced by

Electric Forces and Fields - . three identical charges are lined up in a row. if we compare the electric force charge q 1

Electric Forces and Fields - . it all began with a