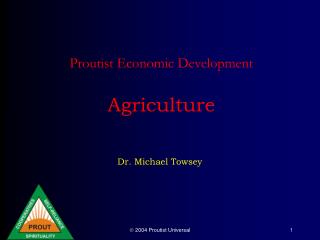 Proutist Economic Development Meditation - . dada maheshvarananda. the benefits of meditation in the struggle for peace

History of Agriculture - . david a. sleper. agriculture defined. the art, science, and business of managing the growth of

Agriculture - . chapter 11 dawson 2013. essential question:. what is agriculture and where did agriculture begin?.