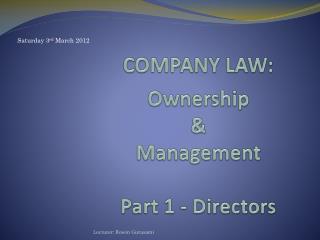 Board of Directors (BoD) Some Guidelines - . this will need to be tailored to each company’s situation: it should be

Directors and Officers - . corporate law: law principles and practice. who manages the company? a company, as an

What are stocks? - . represent a fraction of ownership in a corporation referred as: shares equity stock.

About the Company - . avenues to wealth opportunity. international directors. local directors. it has over 100 e-books

Hungarian State Holding Company:Governance of state ownership - . presentation to the high level meeting of the state

About the Company - . avenues to wealth opportunity. international directors. local directors. it has over 100 e-books

Different models of ownership - . company primarily run for the benefit of the workforce as owners. company is not run

Management and administration - . directors. directors:. directors are the persons responsible for the management of a

Stock Market - . introduction to the stock market. what is a stock?. partial ownership in a business dividends = profits