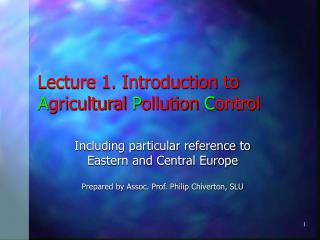 Lecture 1. Introduction to A gricultural P ollution C ontrol. Including particular reference to Eastern and Central Europe Prepared by Assoc. Prof. Philip Chiverton, SLU. Pollution : ‘the introduction by man, directly or indirectly, of substances or energy into the environment, In this lecture, you will learn the following. 1. Basics of real-time c ontrol engineering - 2. effects of fixed and

S upervised A gricultural E xperience - . a. describe a supervised agricultural experience (sae); b. list and