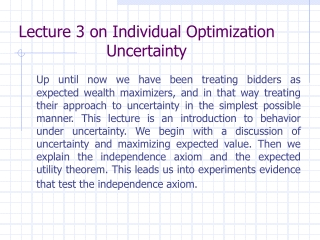 Including Uncertainty Models for Surrogate-based Global Optimization The EGO algorithm - . introduction to optimization

Lecture 1(c) Marginal Analysis and Optimization - . why is it important to understand the mathematics of optimization in

Uncertainty and Rules - . we have already seen that expert systems can operate within the realm of uncertainty. there are