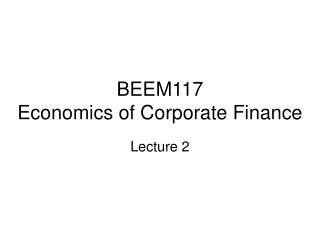 BEEM117 Economics of Corporate Finance. Lecture 2. Asymmetric Information. What happens to market outcomes when there is asymmetry of information between sellers and buyers (or investors and borrowers)?

APPLIED CORPORATE FINANCE - . aswath damodaran www.damodaran.com. what is corporate finance?. every decision that a

Corporate Finance - . some important questions that are answered using finance what long-term investments should the firm

Corporate Finance - . objectives of the course . on successful completion of this course, you should be able to: identify