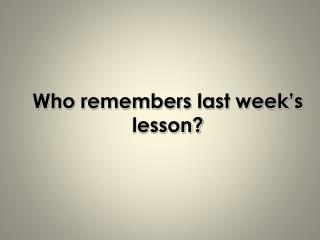 Who remembers last week’s lesson?. Always look up to the Lord for help!. Anyone bitten by a poisonous snake that looks at the bronze serpent was healed. This helped them remember that God will take care of them. What does the bonze serpent represent?.

Salinity Pre Lab - . we got to know the stuff before we do it!. do now: you need to sit quietly and get ready for your

Week 13 - . much review, some brainstorming, lots of analysis. class. final assignment – due next week h ealthcare