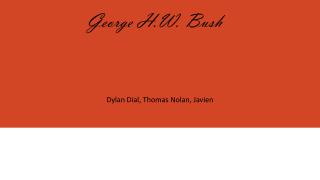 George H.W. Bush. Dylan Dial, Thomas Nolan, J avien. entry task, 1 or 2 riddles of some sorts to get the mind thinking. 1) I HAVE ALL YOUR KNOWLEDGE BUT COULD FIT IN YOUR HANDS. WHAT AM I? the answer will be given last during exit task (no cheating no cell phone or computers) George H. Bush - . by. john &amp; eric. before. george herbert bush was a son of a senator he joined the navy and

George W. Bush - . the election of 2000. the american economy prospered under clinton ( government had a budget surplus)

George W Bush - . by justin morgan . facts # 1. bush is the oldest of 6 siblings. his younger sister, robin, died of

President George W Bush Essay - . overview and research. overview. you will be writing a five paragraph essay to answer a