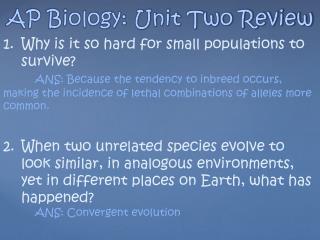 AP Biology: Unit Two Review. Why is it so hard for small populations to survive? ANS: Because the tendency to inbreed occurs, making the incidence of lethal combinations of alleles more common. What is Biology? - . biology- natural science concerned with the study of life and living organisms fundamental concepts

Welcome to Biology 300 Mrs. Geithner -Marron - . the study of living things &amp; how they interact with each other

Unit 9 Exam Review - . conservation biology – conservation may be defined as the management and sustainable use of the

Unit 1 Review - . this is a short review for the upcoming unit 1 test. run through this game a few times to make sure you