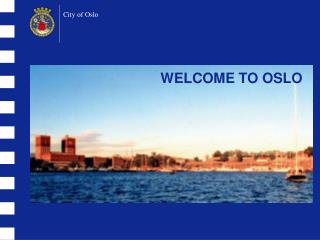 UNIVERSITY OF OSLO - . cytokine expression profiling of the myocardium reveals a role for cx3cl1 (fractalkine) in heart

OSLO - . oslo is the capital city of norway . it’s the most populated city of this country and it has about 600.000

An overview of Oslo - Agenda. modeling and microsoft's visionapplications, models, data and runtimesoslo

Cycle-Based Waste Management in Oslo - . a complete solution for a cycle based waste management system in oslo.

DEDICATED ONCOLOGY CLUSTER - . oslo cancer cluster is a research and oncology cluster within the field of oncology. we

Electric vehicles in norway and oslo - . marianne mølmen agency for urban environment, city of oslo. an introduction to