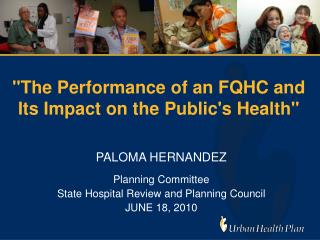 "The Performance of an FQHC and Its Impact on the Public's Health". PALOMA HERNANDEZ Planning Committee State Hospital Review and Planning Council JUNE 18, 2010. Overview - Urban Health Plan. Founded in 1974 by Dr. Richard Izquierdo Became FQHC in 1999 What is the evidence of the impact of the economic crisis on public health? - . david stuckler, phd mph oxford and lshtm