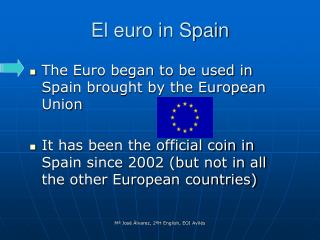 El euro in Spain. The Euro began to be used in Spain brought by the European Union It has been the official coin in Spain since 2002 (but not in all the other European countries). El euro in Spain. It’s very easy to travel around Europe but life is more expensive

2 Euro 2002 - A women rides the beast: how the church of rome, protestants, hindus, and all the world’s religions are

The Euro. - The euro. the euro is the currency of the european union except in denmark, sweden, the united kingdom,

SERGIO RAMOS by : Estefanía - . introduction. . sergio ramos played 100 games with “the red”. . he is a soccer

CATALONIA - . spain. we are more than 7 milion catalans. the capital city is barcelona. catalonia is about 32000 km².