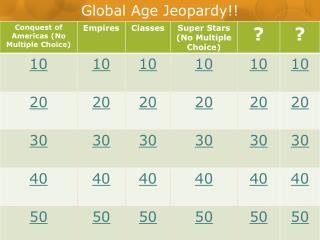 Global Age Jeopardy!!. Italian Explorer, sailing for Spain, who reached the Americas 1492 while searching for a western sea route from Europe to Asia. Christopher Columbus. Back. A scattering of people. Diaspora. Back.

Welcome to 4 th Grade Jeopardy!! - . by caroline lamagna. jeopardy – round 1. click here for round