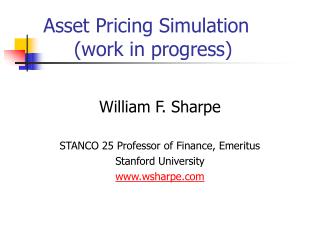 Work in Progress - Why, where and how to use the  - model josef widder embedded computing systems group

Asset Pricing Models - . a. what are asset pricing models?. explaining asset returns, r i in a well-functioning capital

Work in Progress - ...being confident of this, that he who began a good work in you will carry it on to completion until

WORK IN PROGRESS - . the boy and the factory farm. work up to date. character development plot diagram brainstorming