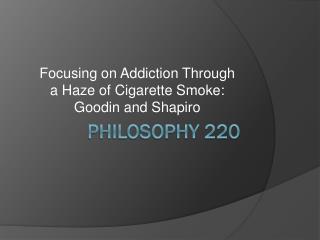 Focusing on Addiction Through a Haze of Cigarette Smoke: Goodin and Shapiro. Philosophy 220. Goodin on Paternalism and Rights. Project: “ carve…out a substantial sphere of morally permissible paternalism ” (150c1).