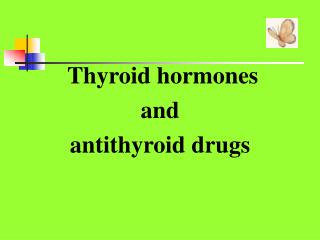 THYROID HORMONES - . hypothyroidism---deficiency of thyroid hormones and manifested by slowing of all body functions.

Thyroid Hormones and Development - . growth vs. maturation. growth refers to increase in the size of a tissue, organ or

Thyroid and Anti thyroid drugs - . role of the thyroid gland. participates in normalizing growth and development and