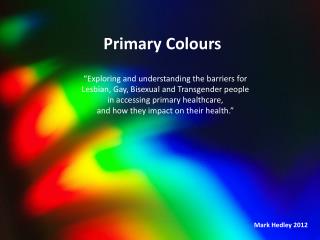 Primary Colours “Exploring and understanding the barriers for

Primary Colours “Exploring and understanding the barriers for Lesbian, Gay, Bisexual and Transgender people in accessing primary healthcare, and how they impact on their health.”. Mark Hedley 2012. Area of residence. Sexual orientation. Choosing a GP Practice.

Primary Colours “Exploring and understanding the barriers for

The Things We Carry - . mark janda the harker school markj@harker.org. how our past impacts our classroom. needed norms.

Module 5A for Secondary Teachers - . florida standards for ela &amp; literacy: focus on universal design for

GEOS 115 Introduction to Oceanography - . what is oceanography?. the goal of understanding the oceans through the

May 20, 2011 Presenters Monica Collins &amp; Alejandro Covarrubias - The barriers men of color face in the movement

AGEISM and ABUSE IN LATER LIFE - Those that would pass the latter part of life with honor and integrity must, when young,