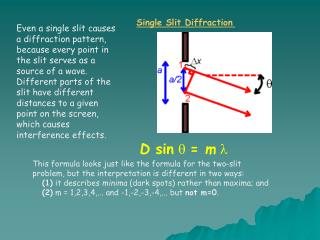 Single Slit Diffraction. Even a single slit causes a diffraction pattern, because every point in the slit serves as a source of a wave. Different parts of the slit have different distances to a given point on the screen, which causes interference effects. D sin q = m l.