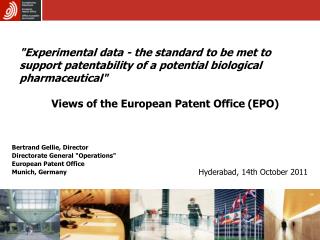 Enterprise and Industry Directorate-General - . european commission. the regulatory approach to macs in the european

European Commission - . sgs-1-1. enterprise and industry directorate general. development of an eu regulation for the

The European Patent Office An introduction to the EPO and the European patent system - . sipo-ohim-epo joint seminar on