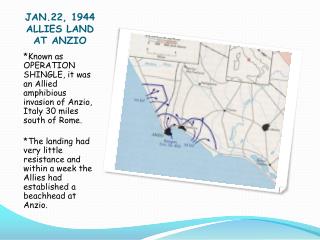 JAN.22, 1944 ALLIES LAND AT ANZIO. *Known as OPERATION SHINGLE, it was an Allied amphibious invasion of Anzio, Italy 30 miles south of Rome. *The landing had very little resistance and within a week the Allies had established a beachhead at Anzio.

D-Day to the End - . what was the situation in 1944?. the russians have defeated the germans and are advancing in the

Battle of the Bulge - Bailey widman 2a april 7, 2011. battle of the bulge. december 1944. german nazis are approaching

Battle of the Bulge - . by: jeff beason. in december 1944 adolph hitler directed an ambitious counteroffensive with the

13.4 America Enters the War - . i. the isolationist debate. by 1940, most americans favored limited aid to the allies

Allies - . who were the allies?. does this s ound right?. “ the enemy of my enemy is my friend ” during wwii, the

Allies Move Forward - . in january 1944, the allies launched a series of attacks in italy on the line of monet cassino by

Victory In Japan - . 17.4 pt 5. victory in japan. although the war in europe was over, the allies were still fighting the

America Joins the Allies - . what was happening in the war?. blockades attacks allies were desperate zimmerman note

Why did the allies launch operation overlord? - . the aim of the lesson is to help you understand the events that lead to

World War II - . european theater of operations the ground war. components of the war in europe. the naval war the air