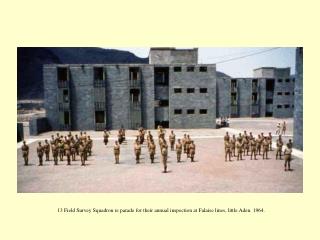 13 Field Survey Squadron re parade for their annual inspection at Falaise lines, little Aden. 1964. A convoy of 3 tonners, carrying the field surveyors of 2 Troop, 13 Field Svy Sqn RE, enroute for the Radfan. 1964. 37 Field Squadron R.E - . the squadron’s role whilst serving in egypt as part of 32 guards brigade; 3rd inf div, during

Field Survey - . introduction. what is a survey?. survey = process of identifying and gathering data on a community's

Magnetic Field Lines for a Loop - . figure (a) shows the magnetic field lines surrounding a current loop figure (b) shows

Inspection 2012-13 - . s48 diocesan inspection and catholic life. agenda. the changes in the 2012 framework what we have

Inspection 2012-13 - . s48 diocesan inspection and catholic life. agenda. the changes in the 2012 framework what we have

Standard Little League Field - . not drawn to scale. how to convert a standard little league field to a little league

Roof Inspection Little Elm TX - We understand that roofing emergencies can arise at any time, and we take care of you