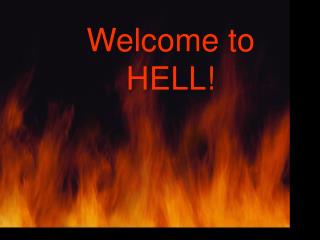 Welcome to HELL!. The Divine Comedy by Dante Alighieri- Only copy the notes. Dante’s Background Born in Middle Ages Florence in 1265 Married Gemma Donati and had three children Two boys-exiled; one daughter who was sent to convent Died in Ravenna in 1321. Dante’s Career. The Doctrine of the Annihilation of the Wicked - . pastor rex deckard calvary apostolic church. where do the wicked spend

THE MEANING OF HELL - . the punishment of the wicked. the 15th study in the series. studies written by william carey.

WELCOME TO HELL - Dante’s inferno . welcome to hell. what will hell look like? what descriptions or allusions from

Love in Hell - . michael mcclellan. quest. the heart of confusion. not much is known about this precious object.

Why? - Hell. why?. why we believe that hell is real and eternal. summary of bible teaching on hell. lake of fire (rev.

Going to Hell the old-school way - . respond to the questions on your handout. . jonathan edwards. god has so many

Hell No Southie Won’t Go! - . my family’s experience during busing.

DANTE’S VISION OF HELL, THE INFERNO - Dante’s inferno (italian for “hell”), the first part of the 14 th century

Heaven and Hell - Lo: i will explore the concept of heaven and hell i will analyse christian teachings about getting into

The Inferno: Pass Among the Fallen People (The Vestibule of Hell) - . feraco myth to science fiction 2 november 2012.