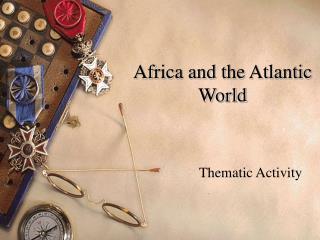 Africa and the Atlantic World. Thematic Activity. Introduction. African Empires in transition: Gold Trade Decline of Mali rise of Songhay. Portugal looking to find a sea routes to the spice islands of the east sacks East Africa, most of Swahili speaking regions including Kilwa and Mombasa. The Atlantic Slave Trade - . 1450-1865. introduction. the atlantic slave trade was the most significant link africa had

Merchant Navy ‘Sparks’  in the Battle of the Atlantic - . experiences of a young radio operator  on the north