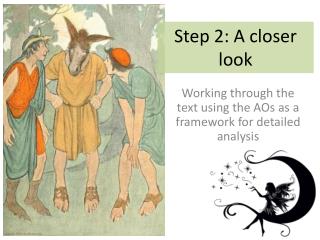 Step 2: A closer look. Working through the text using the AOs as a framework for detailed analysis. Generations of school children have been introduced to the fairies, laughter and magic of A Midsummer Night’s Dream . Preparing an Urban Redevelopment Plan Step by Step - . why develop a ura plan?. provides cities and counties the power to

Welcome to Crossroads Christian Church - . step by step. oh god, you are my god and i will ever praise you oh god, you

FUTUREMED SpiroVision-3+ Step-by-Step Operating Instructions - . this powerpoint presentation will give you an overview