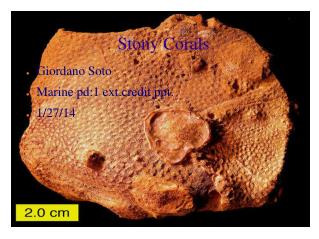 Corals - . landlords of the reefs. what should you know about corals?. they are animals plants live inside of them two

Colorful Corals - . read the passage, and think of the following questions: 1.what is coral made up of ? 2.how does coral

Soft Corals - . soft bodies made up of a large number of polyps connected by fleshy tissue. l ack the limestone skeleton

Branching Corals - . m.l. anderson, 2009. corals. corals can be considered either hard or soft depending on their

Corals and Hydroids - . chapter 7.3 and 7.4. coral reefs. very large structures made from very tiny animals (some are

Stony Brook Update - . t.k. hemmick for the stony brook crew. if cryos are cold, why is it smoking?. cryo compressor

Stony Brook Update - . t.k. hemmick for the stony brook crew. many things in these past 2 weeks. two dry runs of the