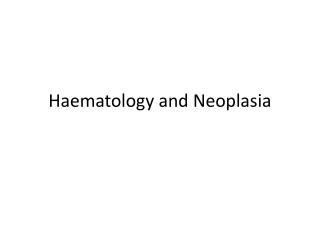 Haematology and Neoplasia. Blood. How much blood do you have? What is in it? What is serum?. Haematopoiesis. Where does it occur? Flow chart Erythropoesis. Structure of Haemoglobin. Structure Types (and when you get them). Thalassaemia. α - Thalassaemia β - Thalassaemia Major

Cryptorchidism - . one of the most common male developmental abnormalities 27,000 orchidopexies annually in usa 89% of

Neoplasia - . helpful references for the students. robbins textbook of pathology

Pathology Course Haematology 2 - . kindly sponsored by:. what will be discussed. tuesday: anaemia, coagulation,

Hematology and Hematologic Malignancies - . cancer of the formed elements of the blood. what is hematology?. hematology