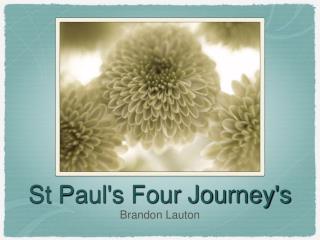 On Paul's first journey(this was his shortest journey) he travelled from the city of Antioch in modern day Israel and ended in Derbe in modern day Turkey. He travelled with Barnabus. From Paul's writings Barnabus "was a good man, full of the Holy Spirit" (Acts 11:24). St Paul's Four Journey's. Trevor Patzer Is An Alumnus Of St. Paul's School - Trevor patzer is founder and executive director of little sisters

PAUL'S PASTORAL APPEAL - . lesson 9 for november 26, 2011. this week we will study the personal characteristics of paul

Paul's Tile Cleaning Sydney - Here you'll find all the help you need when taking care of your tile flooring! our

Paul's Letter to the Philippians - . introduction. in affliction paul writes—1:7, 16 a prayer of thanksgiving—1:1-11