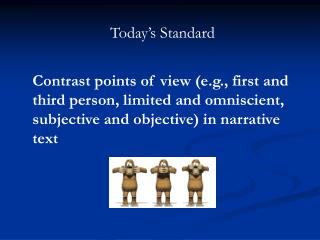 Today’s Standard Contrast points of view (e.g., first and third person, limited and omniscient, subjective and objective) in narrative text. Point of view is the vantage point, or angle, from which a story is told. There are three basic points of view: first-, third- and second-person. What is Q methodology? - . professor paul stenner university of brighton. synopsis of q methodology. focus on the

Jeopardy - . choose a category. you will be given the answer. you must give the correct question. click to begin. s.

Pain is subjective - . self-experience experience depends on circumstances pain can cause many different reactions:

The Drive-In Movies by Gary Soto - What is first-person point of view?. the narrator is a character in the story.. 2.

Conflict in Cub Pilot on the Mississippi - Learning goals. differentiate between internal and external conflict. identify

Objective : DWBAT review the IA passage to compare and contrast the reigns of Romulus and Numa - . iii/xxii/mmxiii. do

Jeopardy - . lisa will read the question. the first person to stand up will be called upon to answer. if they answer the