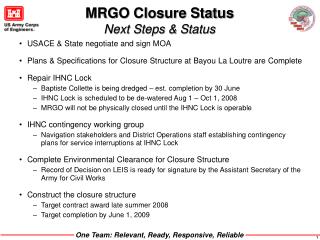 Next Steps - . future briefs. what was the impact of the michigan promise scholarship (mps) on college enrollment,

Geospatial Platform Status and Next Steps 13 June 2013 - . geoplatform 2.0. goals: facilitate the use of geospatial data

Next Steps - . from mekong to bali: the scale up of tb/hiv collaborative activities in asia pacific region 8-9 august

THE PROJECT AT A GLANCE OVERVIEW, STATUS, CHALLENGES &amp; NEXT STEPS - A pancap/giz/epos project. improving access

Next Steps - . 1 st step. work with mhec about scholarships for electronics students (example)

Moldova Joint Assistance Strategy: status and next steps - . purpose of the mjas. a joint partnership between government