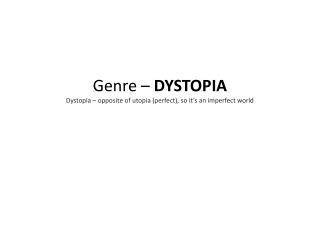 Genre – DYSTOPIA Dystopia – opposite of utopia (perfect), so it’s an imperfect world Genre – DYSTOPIA Dystopia – opposite of utopia (perfect), so it’s an imperfect world. Generic conventions. Dystopian worlds: Fictional place or state where everything is unpleasant or bad. Dystopia explores Postmodern themes through the challenging narrative themes.

Genre – DYSTOPIA Dystopia – opposite of utopia (perfect), so it’s an imperfect world

A Fox and a Kit Big Question: How can we help animals around the world? - . author: judy nayer genre: photo essay. timer.

The HORROR Genre - . a2 media. what is horror?. horror films are unsettling movies that strive to elicit the emotions of

Pre-production Phase - . forms &amp; conventions. what is genre?. ‘in film theory, genre (or) refers to the method

Sequence of Tenses - . spa2020 intermediate spanish ii. step one. does the sentence have a “ si ” clause? yes- what

Genres Of Literature - . please take notes in the third section of your notebook. if you have already created your genre

Present Perfect - . in english , the present perfect is essencially a present tense, but it also expresses the effect of

The Gothic genre - . as a “problem-atization” of the decayed aristocracy. what was “gothic”?

Genres for Young Adult Literature - . definition of genre classes of genre how to approach them with young adults betty