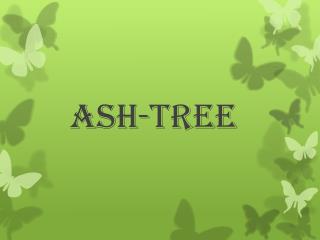 Ash-tree. Few words about the Ash-tree ….

Optimal Binary Search Tree - . we now want to focus on the construction of binary search trees for a static set of

The Atmosphere - . it appears that approximately an inch (2.5 cm) of ice is coating this hapless tree. the icy fangs are

CHAPTER 5 Trees - . trees. root. leaf. definition of tree. a tree is a finite set of one or more nodes such that: there

Fault Tree Analysis - . why do we need fault tree analysis? what is it? why do we use it? why this matters to you how it