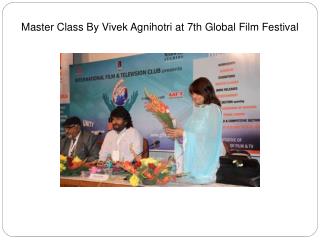 “A proper education and training can always put you on better platform. It can give you good start and progress is sure” said Vivek Agnihotri renowned film director expressing to the young film makers on the first day of 7th Global Film Festival Noida at Marwah Studios. “Direction needs lots of concentration on your project. Writing skills is a bonus to the director” added Agnihotri in a master class who has brought his unreleased film ‘Buddha In A Traffic Jam’ as the opening film of the festival. Vivek Agnihotri is an avant-garde Bollywood Indian film director, producer and screenwriter. Agnihotri is one of the few new age Hindi cinema film directors, known to experiment in different genres of film making. He has ventured into genres like erotica, thriller, sports, political dramas and love stories making him a multi genre director.

Best of Berlinale - Highlights from the international film festival in

Mad Max: Fury Road at Cannes - The stars come out for the mad max: fury road screening at the cannes film

How to Become a Master Communicator - Presented by rich russakoff for sanibel chamber of commerce august, 2003. how to

Unit 2 - . section a period 1 (1a —2d). look at the pictures and say what festivals they are. chinese spring festival

Chinese Festival - . helpful hints. go to the next page. go back to the previous page. go to the main menu. go to the