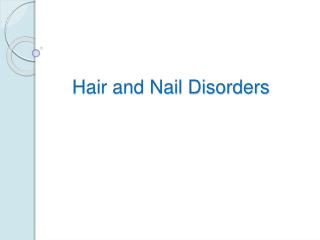 Nail Disorders - . to give clients professional and responsible service and care, you need to know when it is safe to

Chapter 10 Nail Disorders and Diseases - . “change and growth take place when a person has risked himself and dares to

Hair Loss Disorders and Treatments for Hair Loss - Types of hair loss disorders are explained. if you are suffering

Nail sticker offers hair tattoo designs - Look cool and gorgeously beautiful, stand apart from the crowd in the next