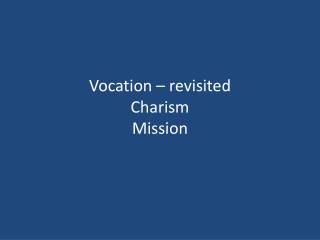 Vocation – revisited Charism Mission. Vocation. It is God who calls. We are not the ones who choose. Called to Life. Called to life in Christ. Acceptance of revelation. Called to Holiness, which is sharing in the Life of God Called to a state: lay ordained, religious, secular . THE SCHOOL MOOE REVISITED - . school mooe. i. guidelines on the use of school mooe legal basis: 1. department of budget

Introducing - . pat dillon scribe, n5-352-12. values, mission, and vision. learning objectives. as a result of this