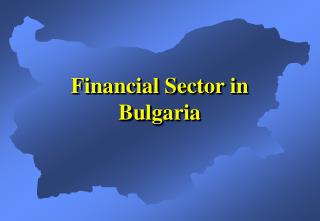 Financial Sector in Bulgaria. Bulgaria - Currency Board Arrangement. BGN1 = DEM1 = EUR0.5113 Long-term goal for EU membership, the anchor currency being the Euro The share of the Euro in the external trade is constantly increasing The EU is by far the leading trade partner of Bulgaria Conditions and challenges to dairy sector in Bulgaria - . atanas kiskinov national dairy board co-financed by the

Financial Sector Reform - . 1980s not really considered as part of economic reform banks were seen as the state’s

FINANCIAL SECTOR REFORMS - . vision a market based financial sector owned and managed mainly by the private sector but