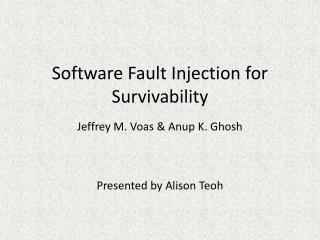 Preparing Medications for Administration by Injection - . ampules. is a glass flask that contains a single dose of

CHAPTER 27 Fuel-Injection Components and Operation - . objectives. after studying chapter 27, the reader will be able to:

Building SOLID Software with Dependency Injection - . jeremy rosenberg. me. who cares about software design?. what are

Software and Security - . why software?. why is software as important to security as crypto, access control and

Fault Tolerance - . reliable system from unreliable components. principles of computer system (2012 fall). where are we?.

CprE 545: FAULT-TOLERANT SYSTEMS - . lecture 1 : what is fault tolerance all about?. course information. webpage: