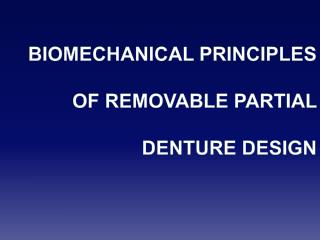 BIOMECHANICAL PRINCIPLES OF REMOVABLE PARTIAL DENTURE DESIGN. SHOULD NOT EXCEED THE LEVEL OF PHYSIOLOGICAL TOLERANCE. BIOMECHANICS AND DESIGN. BIOMECHANICS (GPT 7): 1. : the application of mechanical laws to living structures, specifically the locomotor systems of the body Role of Stress Breakers in removable partial denture - . class i, class ii and class iv are subjected to greater

REMOVABLE PARTIAL DENTURES - . terminology. prosthesis. is an artificial replacement of an absent art of the human body.

Biomechanical Principles: - . stability and balance. stability = the ability of an object to stay balanced review: centre

Principles of Biomechanical Analysis - . lesson 8. quote of the day. “the question isn’t who is going to let you, but