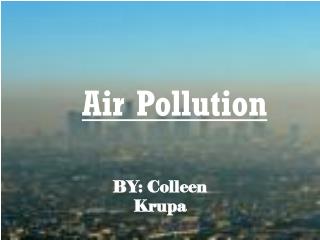 Air Pollution. BY: Colleen Krupa. Causes Of Air Pollution. Pollution- any change in the atmosphere that has a harmful effect Pollutants- substances that cause pollution (ash as a solid, or chlorine as a gas) Emissions- solid partials and gasses that are release into the air. Natural Causes