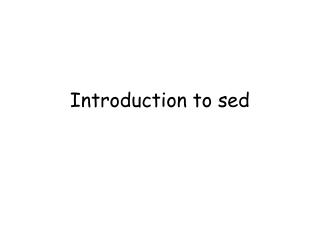 sed - . sed is a program used for editing data. it stands for stream editor. unlike ed , sed cannot be used interactively

SED) - . presentation to the international conference on globalisation and development in the chinese economic region,

SED - . (stream editor) by: ross mills. what is sed?. sed is an acronym for stream editor instead of altering the

SED 695C - . week 2 mini lessons titles strong introductions. titles. a mini lesson. what does a title do? what are the

9 The sed Editor - . mauro jaskelioff (based on slides by gail hopkins). introduction. sed is a stream editor designed to

awk - . awk is a file-processing programming language. makes it easy to perform text manipulation tasks. is used in

AWK - A pattern scanning and processing language made by aho weinberger kernighan and explained by albert montijn. awk.