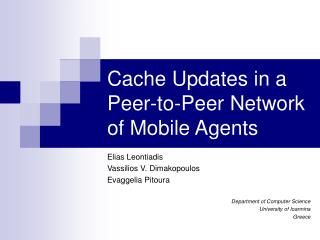 Cache Updates in a Peer-to-Peer Network of Mobile Agents

Cache Updates in a Peer-to-Peer Network of Mobile Agents

1DT057 Distributed Information System - . distributed systems characterization and design. outline. 1. what is a

Pervasive.SQL 2000 - . the freedom to create applications for everyone, everywhere. proud to be part of the:. conference.

IBM System Storage Product Overview Part 1 - . this document is for ibm and ibm business partner use only. it is not