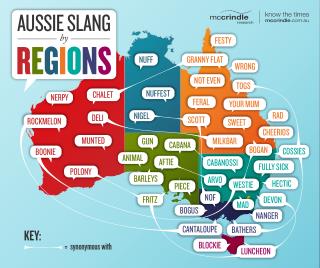 Research by Mark McCrindle and McCrindle Research on the Australian language.
Slang and language varies from one region to another. Even in one nation, people use different words to describe the same thing. A number of regions, cities, and schools have their own slang terms which baffle people even from neighbouring areas! Words that are understood more or less nationwide can be much more prevalent or popular in some parts than elsewhere.

To illustrate, the afternoon in the east coast (ViC, NSW, and QLD) is arvo whereas in South Australia it is aftie. The kid’s chasing game – i.e. being ‘safe’ – is bar in New South Wales, whereas it is barleys in Western Australia, South Australia, and Victoria.

Slang, Dialect, and Standard English - . what is the difference???. standard english. a controversial term for a form of

Slang - . 1. if someone goes to the loo in a bar, where are they going? a) the bar b) the cigarette machine c) to talk to

Writing with Slang - . dialect. a form of language that is characteristic of a particular place or group of people can

Slang and Academic Discourse - . what is slang?. slang is informal language consisting of words and expressions

Writing with Slang - . what is slang?. according to dictionary.com very informal usage in vocabulary and idiom that is

What is slang ? - Used socially. informal. what is slang ?. how does the words that are used as slang relate to the time

Aussie Slang by Bobbilynn Mrs.Kringer - . g’day mate. lets go cook steak on the barbie. history. most of the people in

British Slang - . where is it used?. as the name suggests, british slang is commonly found all over england. although, it