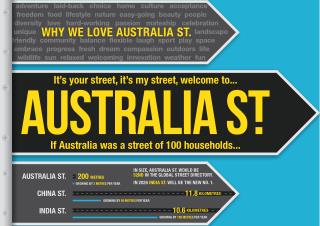 McCrindle Research has released AUSTRALIA STREET, a visual representation of our nation as a street of 100 households.Australia Street is a diverse place to live, a mix of cultures, generations, life-stages and professions. There are 260 people living on Australia Street, with an average of 2.6 people per household. It’s a far cry from 100 years ago when the average home had 4.5 residents, but makes sense when considering the average fertility rate among Australian women. In 1961 the average was 3.5; a figure has decreased to just 1.88 in 2011.
Despite households decreasing, house sizes are on the rise! From 1976 to 2011 the proportion of dwellings with four or more bedrooms has risen from 17% to 31%, and the average number of bedrooms per dwelling has increased from 2.8 to 3.1! A reason for this increase might be that nearly 7 in 10 (69%) Australians believed having a bedroom per family member was a middle class staple and not only the domain of the elite. Libya “ A nation risen from the ashes.” - . matt schmitt 1 st period. map of libya. libya is located in northern

The Life of Australia is Through out every where - . by hayley mitchell. the