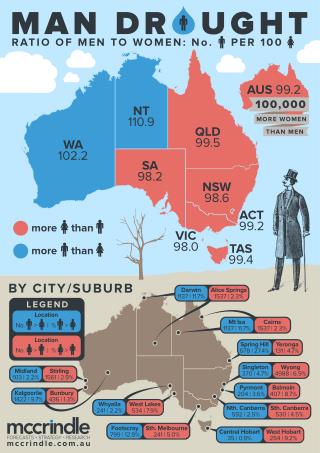 The so-called “man drought” is an expression that has been used to describe the demographic reality in Australia of the population of women exceeding that of men. In Australia there are almost 100,000 more women than men, with 6 out of our 8 states and territories experiencing a man drought, while the Northern Territory and Western Australia have a significant male surplus. Currently there are almost 105 baby boys born for every 100 baby girls and so while there are more male than female children and teenagers in Australia, the gender gap dissipates in the twenties and by age 35, there are more females than males.

Victoria is the state with the highest ratio with females to males (98 males to every 100 females), with 58,399 more women than men. In Victoria there are no population centres not currently experiencing a man drought. However, suburb by suburb reveals gender disparities. Footscray has a man surplus (13% more males than females), whereas a few suburbs away in South Melbourne, the man drought is very evident with 5% more females than males.

NSW: Singleton is living up to its name with not only almost 5% more males than females, but with a median age of just 33 (well below the national average age of 38), many of these males are indeed single. Interestingly, just 90 minutes south is Wyong, where there are almost 7% females than males (almost 5,000).

Sydney makes for a fascinating study in populations by gender, with Pyrmont having 3.6% more males than females whereas the next suburb over the Anzac bridge lies Balmain with 8.7% more females than males.

QLD: While Queensland is suffering a man drought at an overall state level, the drought has more than broken in many of its inland cities, particularly where there are mining activities and Mt Isa is a classic example with almost 12% more males than females (an oversupply of 1137 men). However 1,000kms north east is Cairns with a man drought (1537 more women than men).

In Brisbane, the river represents a man drought divide with Yeronga experiencing the man drought (almost 5% more women than men), while Spring Hill has a man over supply (a whopping 27% more men than women).

SA: In South Australia, Whyalla is home to one of the state’s few places not experiencing a man drought with 241 more men than women. While West Lakes (along with most suburbs in Adelaide), is in man drought with almost 8% more women than men.

WA: Many of WA’s towns have no man drought – Kalgoolie a leading example with almost 10% more men than women, while Bunbury, south of Perth, like many of WA’s costal towns has more women than men (1.3%).

Causes of Infertility in Men and Women - . by: tammy, merissa, and heather for nursing 519 unit 6. infertility…an

Men and Women of the Marshall Islands - . observations by marie maddison.

Men and Women of the Elizabethan Era - . by joel lin and cristina rodriguez. women. in the elizabethan era women were

Men and Women in Conversation - . presented by: monica thorpe and cassie fredendall. 2 may 2007. objectives. to determine

Men and Women - . from robert wright’s the moral animal presented by charlette lin. one can, in effect, treat the sexes