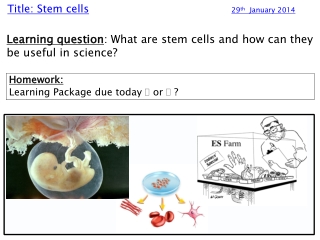 Title: Stem cells 29 th January 2014. Learning question : What are stem cells and how can they be useful in science?. Homework: Learning Package due today  or  ?. Aims from specification document. (k) define the term stem cell ; 29 January 2014 - . define soliloquy, monologue, and aside. what is embarrassing about the balcony scene for juliet? of

Wednesday January 29 th - . come in and quickly have a seat. begin reviewing for your test. have your chapter 8 exam

Bellwork January 29, 2014 - . placed around the room you will find pictures from wwii. on the sheet provided to you

Parents’ Information Evening Ofsted January 29 th 2014 - . aims of this evening. to share with you what the report

Stem Cells - . what are stem

Stem Cells - Use wicell.org main page and outreach for videos. stem cells. the biotech issue that may no longer be an

Stem cells - . we need to live longer and to be developed healthier . stem cells are thought to hold huge potential for