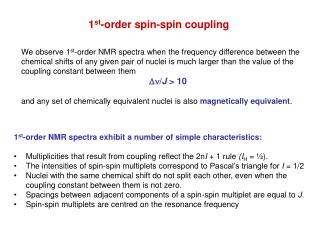 1 st -order spin-spin coupling. We observe 1 st -order NMR spectra when the frequency difference between the chemical shifts of any given pair of nuclei is much larger than the value of the coupling constant between them Dn / J > 10 Spin-Spin Splitting - . at higher resolution, we see that the -ch 2 and -ch 3 peaks are split: why? shielding is also

SPIN - . well i’ve been moving in a new direction and don’t you know that something’s gonna change. i’ve been

Spin - . many quantum experiments are done with photon polarization instead of electron spin here is the correspondence

SPIN - . slides created by kathy buckland at the university of british. what’s happening here?. an example of circular

SPIN - . an explicit state model checker. how does spin work?. we already saw: the algorithm the promela language we need