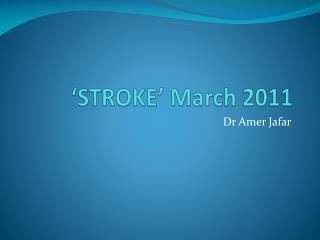 ‘STROKE’ March 2011. Dr Amer Jafar. Early Dementia After First-Ever Stroke. From 1985 to 2008, overall first-ever strokes occurring within the population of the city of Dijon, France (150 000 inhabitants) were recorded Data for Student Success MACUL March, 2011 - . “it is about focusing on building a culture of quality data through