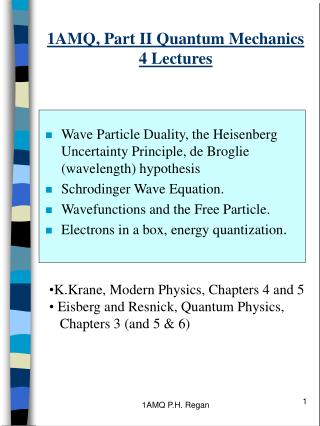 More electron atoms - . structure. due to the pauli-principle only two electrons can be in the ground state further

Lecture I: The Time-dependent Schrodinger Equation - . a. mathematical and physical introduction b. four methods of

THE HEISENBERG UNCERTAINTY PRINCIPLE - Overview: consider a quantum system in state , and two observables a, b (with For linear motion, you have seen how the deBroglie wavelength changes as the momentum - Of the particle changes (e.g. Particle in a Box - . class objectives. introduce the idea of a free particle. solve the tise for the free particle case.

The ELECTRON: Wave – Particle Duality - . graphic: www.lab-initio.com. the dilemma of the atom. electrons outside the